Hey! You know, I’ve been writing more in the last few weeks. Anyway, I want you to know more about my work at the studio. I finished a project on a Barcelona road, where I decided to take a “friendly shopping street” on one of the most commercial streets in the world. All shoopping streets are for shopping but there are discos, bars or walks to do, but I with the help of the locals, to whom I asked to sign on the project I turned a street like Via Montenapoleone into a friendly social street, where when you go shopping you can also sit on a bench stop drinking , take a walk and above all to do conocences. And now I had the pleasure of making it up to you, it’s called “Paseo de Gracia” in Spain with the district committent partecipation’s. Thank you. This is the Creative Studio Raminghi, just for these times.

P.S .: Hey guy! However, communism is back, and guagiu ‘I hated it, I learned one thing, that you can become models even as a communist, they reinvented themselves within the Communist Party in Russia, a beautiful nobility, to create it work instead of giving it away practically as politicians have become technicians but above all and here comes the worst, not even knowing that it has become from popular and propaganda to something occult and “enlightened”. 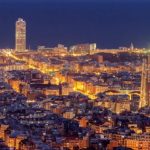